by Tawny Reynolds || March 29 2017
A new month, and time for some fun facts about the April birthstone - diamond!  We all know diamonds are a girl’s best friend, but you may not know some of these Diamond Fun Facts:

The largest gem-quality diamond ever discovered was the Cullinan diamond in 1905 in South Africa.  After cutting and polishing, the two largest pieces were 530 carats and 317 carats.  Both are part of the British crown jewels.

Cullinan diamond pieces in the rough

Diamonds form in the Earth’s molten mantle, and are brought up into the crust during small, violent volcanic eruptions.  They remain behind in the volcanic kimberlite pipe that brought the lava to the surface.  The ancient Hindus believed diamonds were created by lightning bolts that struck the Earth - although that would have been a huge lightning bolt, as kimberlite pipes are up to a kilometer wide! 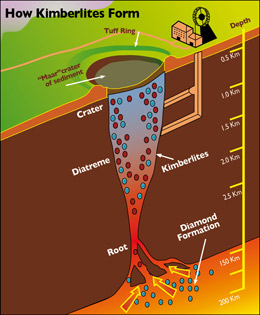 It appears that diamonds have only formed three times in the Earth’s history - 3.3 billion, 2.9 billion, and 1.2 billion years ago - and that Earth no longer makes diamonds!  Diamonds do (very) occasionally arrive on meteorites, however.

As the hardest known material, diamonds can only be cut with other diamonds - such as diamond dust applied to a saw or polishing wheel - or, in more modern times, with a laser.

And if high-priced diamonds aren’t quite your thing, check out my glittering sun-melted glass jewelry made from Coca-Cola bottles! It’s the symbol of enduring love, a girl’s best friend, and the symbol of eternity. While traditionally colorless or white, often diamonds do have a tinge of color about them.

These sun-melted glass droplets are made from recycled Coca-Cola bottles, nearly colorless with just a hint of green.  Green in more ways than one, your April birthday girl (or Earth Day loving eco-fashionista) will love these sparkling droplets of eco-friendly glass jewelry - and at a pocket-friendly price!

Using sunshine and a giant magnifying glass, I melt recycled bottles and stained glass into elegant droplets, set in in recycled sterling silver. Spring has sprung - with new greens and blues!

Spring Greens (and April Showers) are on the way...

The "Rainy Season" has arrived - in new colors!

Have You Been Waiting For The Next Sale?

Back in stock - recycled earrings!